How to Protect Yourself and Boost Immune Function During Wildfire Season 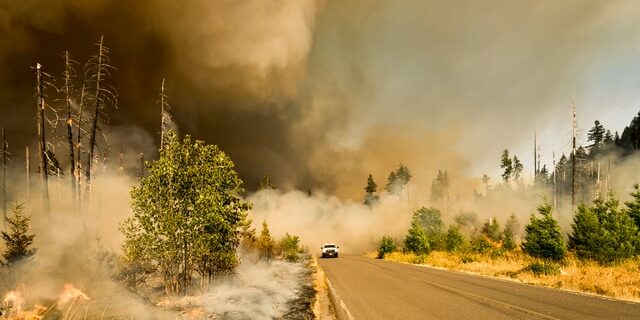 Until recently, wildfires have seemed like a western problem for the United States, like hurricanes in Gulf Stream states and tornadoes in the Midwest. But as of 2021, that’s no longer the case. Wildfires have become a nationwide issue, with smoke from Oregon’s Bootleg Fire impacting cities as far east as New York and Washington, D.C.

Now it’s not just firefighters who are contending with ongoing exposure to toxic fumes, it’s everyone. The biggest danger comes from tiny particulates that can penetrate deep into human lungs, causing irritation and inflammation. Depending on what the fire consumed, those particulates can contain anything from resin and oil from pine trees to toxic chemicals released from housing materials and furniture.

As an example, after the deadly Camp Fire in Northern California destroyed the town of Paradise in 2018, smoke lingered in the cities of San Jose and Modesto, both of which are 150 miles away. That smoke contained dangerous levels of known metals, including manganese, zinc and lead. Lead exposure, as you will recall, lay at the heart of the Flint, Michigan water crisis, is known to cause developmental problems in children and has been linked to cancer and reproductive issues in adults.

So here’s the bad news: scientists don’t know a lot about the effects of long-term exposure to these substances, but what they know about the impacts of short-term exposure is alarming. Health effects range from eye and respiratory tract irritation to difficulty breathing, reductions in lung function, pulmonary inflammation, exacerbation of asthma, heart failure and even death.

In 2020 nearly 26,000 wildfires burned approximately 9.5 million acres and since 2000, an annual average of 70,600 wildfires burned an annual average of 7.0 million acres. Given the prevalence of fire in the west, developing some coping skills to reduce the harmful impacts of wildfire smoke and boost your body’s ability to respond is common sense.

Protecting Yourself from Wildfire Smoke

The California Air Resources Board (CARB) recommends steps to protect yourself from wildfire smoke:

One thing missing from this list: how to boost your immune response so that if you are exposed to wildfire smoke over a prolonged period (in 2021 Washingtonians spend over a week indoors due to poor air quality), you are ahead of the game.

A simple way to do this before, during and after a stretch of bad air is by removing toxins from your system. Even without the added hazards of wildfire smoke, we are bombarded by environmental toxins every day through our food, water, cleaning products, electronic devices, furniture, and even beauty products. That means that most of us are in a constant state of toxic overload which puts a strain on our systems and leaves us less able to fight off additional threats.  Exposure to heavy metals and other toxins creates chronic-inflammatory reactions, cancer development, hypersensitivity, allergic and autoimmune diseases.

Zeolite is a mineral used to clean up environmental disaster sites and nuclear waste. It is highly effective at removing even the smallest particles due to its negative magnetic charge, which attracts elements such as heavy metals, and its cage-like structure, which captures them. Within the human body, Vitality Detox Drops, a soluble form of zeolite, is equally effective at capturing and safely removing toxins gently and easily over time.

Of course, there are other ways to boost immune function as well. However, safely removing toxins over time will give your body a much-needed head start when it comes to dealing with wildfire smoke, whether you’re in California or New York.

“Wildfire smoke blowing across the U.S. is more toxic than we thought” by Sarah Gibbens, National Geographic, July 23, 2021

“Protecting Yourself from Wildfire Smoke”, California Air Resources Board